As a preschooler, Ava Pierpont vividly remembers dashing to the art room at school to grab thin line markers and a few pieces of paper to draw her family, lots of dogs, and a big house. Now, this 6th grader is sharing her creativity and artwork with the world on Instagram and Etsy.

“Drawing people is my favorite. It’s super fun creating someone who is my own, to look however I want,” said Ava Pierpoint.

You could say Ava was born to draw. Creativity is in her DNA. Her dad, Jesse Pierpoint, is a well-known artist with his own studio. Jesse’s one of a kind pieces are displayed with pride in homes and businesses across the Inland Northwest. His mixed media approach and unique style make him a highly sought-after designer and artist. 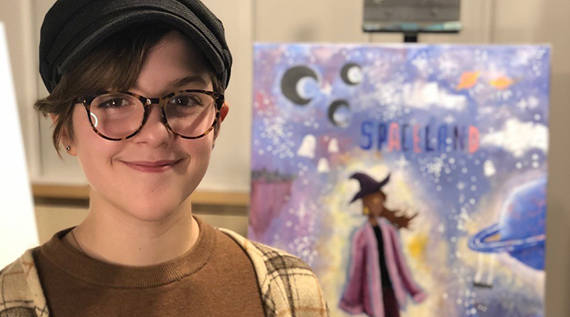 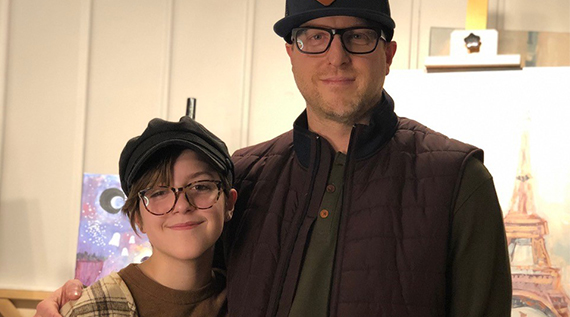 Like Ava, Jesse started doodling as a kid. For Jesse, though, his artwork stemmed from dyslexia. Jesse would often sketch pictures to help him understand core subjects in school.

“I didn’t have my first art lesson until college. I don’t think I had as creative of a mind as Ava,” said Jesse.

Jesse has always encouraged creativity with his kids. When Ava, her twin sister Cienna, and brother, Kenny, were younger, they would spend hours in the basement of their home, surrounded by brushes, paint, and blank canvases.

In between schoolwork, you’ll find Ava sketching people and sculpting clay animals. She’s handcrafted around 200 tiny clay animals, each with a name and story.

“Bob, a blind sloth, who works part-time as an uber driver,” said Ava.

The clay animals have turned into an Etsy shop, Just A Zoo, where you can buy a sticker pack of Keven, a pig, and Sir Bananas III, a cheerful monkey. One summer, Ava and her sister set up a booth to sell stickers and t-shirts at their dad’s art show.

“She started selling more than I would sell. It was fun to see them work together,” said Jesse.

Ava hopes to write a book about all the characters and animals she creates and shares on Instagram. Her dream is to become an artist; however, it appears she’s already there.

“I just don’t know how to make it into a successful career,” said Ava.

All she has to do is look at her dad.

“I love that she is passionate about art and try to guide her and provide her any resources she needs to develop her craft. The main thing I have told her is to embrace messing up. It’s part of the process, and through it, we learn so much. She has such a vivid imagination and a passion to create, and I look forward to seeing what she is making daily,” said Jesse.